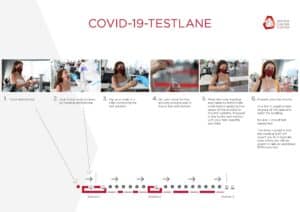 On 16 and 17 September the Austria Center Vienna conducted around 2,000 rapid tests in a pilot project in partnership with the Vienna University of Economics and Business, Arbeiter-Samariter-Bund and medical products wholesaler Alpstar. The resulting interest from event organisers, hotels, hospitals, national and international business and politicians was overwhelming. Across all industries there are high hopes for the new antigen tests. The Austria Center Vienna will make the key insights from the pilot project publicly available, in the interests of creating a repository of information which can be used as a foundation for future events.

“We wanted to use the pilot project to show that rapid tests can significantly improve the safety of events, and that their use is practicable from an organisational point of view. The overwhelming feedback and interest from all industries shows us just how much hope is being placed in the new testing system. We are very pleased to have provided this initial impetus with the support of our project partners and would like to make our insights available to all interested parties,” explained Susanne Baumann-Söllner, Managing Director of the Austria Center Vienna. Out of the 2,000 rapid tests that were handed in, five were positive. The diagnoses were subsequently confirmed in PCR tests conducted immediately after.

Rapid testing at large-scale events: viable from both an economic and organisational perspective
The central finding from the pilot project was that rapid tests are indeed practicable in real-world conditions and represent a meaningful addition to existing hygiene and safety measures. In preparation for the project, a scalable system of test lanes was developed specifically for the rapid test (see test lanes graphic).

Key figures: 30 seconds per swab, one medic per lane, results in max. ten minutes
The pilot project delivered valuable insights into the amount of time testing takes ahead of an event, as well as the number of staff needed: as a basic rule of thumb, the number of test lanes needed and time slots for participants is calculated on the basis of the 30 seconds it takes to complete each swab. Each test lane requires one medical expert to take the throat swab and two to three assistants to prepare the solution and support the test subjects. In addition, a team of paramedics is on hand at the end of the test lane to manage any positive cases. Conducting the test took an average of six to ten minutes from swabbing to receiving the test result – significantly less than the 15 minutes originally planned in.

Five positive results – daily testing at multi-day events required
A total of around 2,000 rapid tests were conducted at the event, with test subjects including students, staff members, employees of partner companies and journalists. In total, five people tested positive. After being isolated immediately, an additional PCR test was carried out before the individuals concerned were sent to quarantine at home.

On the second day of the event, one person tested positive, having presented a negative result on the first day. This particular case once again confirms that an antigen test only ever provides a snapshot of an individual’s viral load. This suggests that rapid tests should be carried out on a daily basis at multi-day events. In addition, a negative test result should never be mistaken for total protection against Covid-19 – but it is an effective tool that significantly reduces the chances of infection at events.

This website uses cookies to improve your experience while you navigate through the website. Out of these cookies, the cookies that are categorized as necessary are stored on your browser as they are essential for the working of basic functionalities of the website. We also use third-party cookies that help us analyze and understand how you use this website. These cookies will be stored in your browser only with your consent. You also have the option to opt-out of these cookies. But opting out of some of these cookies may have an effect on your browsing experience.
Necessary Always Enabled
Necessary cookies are absolutely essential for the website to function properly. These cookies ensure basic functionalities and security features of the website, anonymously.
Functional
Functional cookies help to perform certain functionalities like sharing the content of the website on social media platforms, collect feedbacks, and other third-party features.
Performance
Performance cookies are used to understand and analyze the key performance indexes of the website which helps in delivering a better user experience for the visitors.
Analytics
Analytical cookies are used to understand how visitors interact with the website. These cookies help provide information on metrics the number of visitors, bounce rate, traffic source, etc.
Advertisement
Advertisement cookies are used to provide visitors with relevant ads and marketing campaigns. These cookies track visitors across websites and collect information to provide customized ads.
Others
Other uncategorized cookies are those that are being analyzed and have not been classified into a category as yet.
Save & Accept